SASI Releases New Report: ONE SIZE DOES NOT FIT ALL: What Does High Impact Prevention Funding Mean for Community-Based Organizations in the Deep South?

ONE SIZE DOES NOT FIT ALL: What Does High Impact Prevention Funding Mean for Community-Based Organizations in the Deep South?  underscores concerns that the Centers for Disease Control and Prevention’s (CDC’s) High Impact HIV Prevention funding policy creates a “one size fits all” approach that does not adequately address the HIV prevention needs in parts of the country with large rural (non-metropolitan) and suburban (metropolitan areas of 50,000 to 499,000 population) HIV epidemics.

CDC’s recent funding announcement, PS15-1502, was designed to maximize funding effectiveness by “reach[ing] those areas with the greatest need for HIV prevention services targeting the selected population.”[3] While SASI supports the allocation of significant HIV prevention resources to the large urban areas where the HIV burden is highest, we are concerned about going too far in a one-size-fits-all approach that leaves insufficient funding to address critical prevention needs in other, less urban areas of our country.

When the data is examined on a state level, several Deep South States have a significantly higher percentage of their HIV burden in rural and suburban areas, as shown by the map below. Overwhelmingly, these are areas that are ineligible for direct CBO funding under PS15-1502. According to recent research by the Southern HIV/AIDS Strategy Initiative (SASI), PS15-1502 will have a disparate impact on prevention funding in the Deep South States, creating a funding shortfall that is not sufficiently counterbalanced by increased prevention funding to state health departments.

Percentage of HIV-Positive Individuals in the Deep South States Living Outside an MSA Eligible for CBO HIV Prevention Funding.[1] 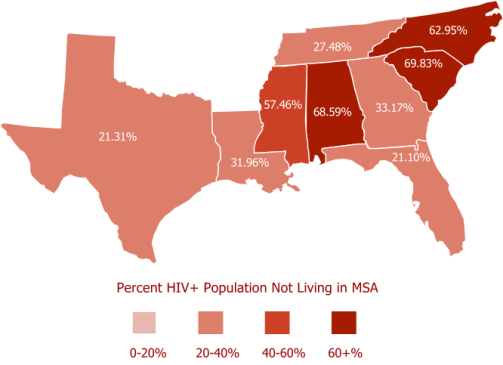 If the PS15-1502 MSA eligibility criteria had been applied to previous CBO funding announcements, southern CBOs would have lost out on a total of $3.8 million in 2004 and $2.5 million in 2010 in direct CDC HIV prevention funding.  Because the disease burden in several Deep South States is located outside eligible MSAs, many CBOs that had previously received direct prevention funding nationwide are currently barred from applying for funding under PS15-1502. Although CBOs may also receive some CDC funding indirectly through their state health departments, this funding does not make up for the shortfall created by PS15-1502.

Recent research by SASI and the CDC found that living outside a large urban area at the time of diagnosis significantly predicted greater death rates among persons living with HIV in the Deep South region.[2] Reduced prevention funding for CBOs, groups that are uniquely positioned to reach communities at risk for HIV, will only serve to increase the HIV burden in regions outside the large urban areas where the HIV diagnosis rates and death rates are high.

SASI calls on the CDC to allocate HIV prevention resources to address the HIV epidemic in suburban and rural regions where HIV diagnosis and death rates are high and survival rates after an HIV or AIDS diagnosis are low.

SASI calls on the CDC to provide targeted HIV prevention efforts in rural and suburban areas that are informed by the epidemic profile of each state and tailored geographically by the social and cultural context in each state.

This entry was posted in Uncategorized. Bookmark the permalink.