“Everyone has role to play in ending HIV epidemic in America.”

February 22, 2012: Today, a few members of SASI, including SASI Director Carolyn McAllaster, attended the National HIV/AIDS Strategy (NHAS) Implementation Assessment meeting in Chapel Hill, North Carolina. At this meeting, Dr. Grant Colfax, Director of the Office of National AIDS Policy (ONAP) and Dr. Ron Valdiserri, Director of the Office of HIV/AIDS and Infectious Disease Policy at the U.S. Department of Health and Human Services (HHS), addressed steps taken to fulfill the goals of the NHAS, as well as next steps and challenges.

An Update on the National HIV/AIDS Strategy

“Don’t Get Mad, Get Data”: Dr. Grant Colfax emphasized that the NHAS is an evidence-driven strategy that has galvanized the national response to the HIV epidemic. ONAP advises President Obama on domestic HIV issues, while a wide range of federal partners, including the Department of Justice, implement various aspects of the strategy.

The NHAS aims to achieve a more coordinated response to the HIV epidemic among federal agencies, and between federal, state, and local stakeholders. ONAP has been focusing on both (1) areas with high AIDS concentrations and (2) communities most impacted by health disparities, including gay men, MSMs, and people of color. Specifically, MSM and gay men account for 2/3 of all new infections, and in 2010, 44% of new infections were among Black individuals and 21% were among Latinos. Black women account for half of new infections among all women. And, according to the CDC’s Greg Millett, “[a]lthough black MSM account for less than 1% of the U.S. population, they comprise one in four of new infections every year.” [Source]

NHAS Next Steps: A Focus on HIV/AIDS among Minorities; CAPUS Grants

While the 12 Cities Project focused on areas of high AIDS prevalence, the Care and Prevention in the United States (CAPUS) grants, part of the Secretary’s Minority AIDS Initiative, focus on enhancing HIV/AIDS diagnosis, and linkage to and retention in care, among minority communities most impacted by the epidemic. Eight grants were awarded–six to Southern states, including Georgia, Louisiana, Mississippi, North Carolina, Tennessee, and Virginia. Illinois and Missouri also received CAPUS funding.

The HIV/AIDS Treatment Cascade: “We can’t treat our way out of the epidemic, but we must treat to end epidemic.” (Dr. Colfax)

Both Dr. Colfax and Dr. Valdiserri emphasized the HIV/AIDS treatment cascade, which illustrates the stark gaps between those diagnosed with HIV and those who have a suppressed viral load. Overall, it is estimated that 82% of people know their status; 66% of those who know their status are linked to care; 37% of those are retained in care; 33% receive ART; and 25% have undetectable viral loads. [Source]

These numbers become even more stark in reference to communities that are disproportionately impacted by HIV/AIDS. 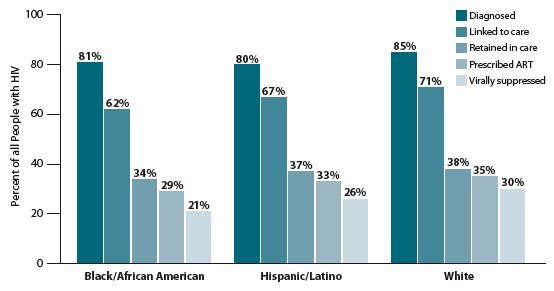 Dr. Valdiserri emphasized that the CAPUS grants are aimed at identifying and implementing local solutions to combat those disadvantageous determinants of health which lead to the disproportionate impact of HIV/AIDS among minority groups.

An Update on the Affordable Care Act (ACA)

Dr. Colfax also discussed ACA, particularly its expansion of coverage, increased prevention services, and the fact that—starting in 2014—no one living with HIV/AIDS can be denied health insurance for having a pre-existing condition. Additionally, HIV/AIDS will be included on the list of chronic conditions for Medicaid health homes, which approximately half of states are implementing.

For more information about what North Carolina is doing to combat HIV/AIDS, and a recap of stakeholder participation in today’s National HIV/AIDS Strategy Implementation Assessment meeting, please check out my  blog post on the Duke AIDS Policy Project website.

Overall, while we have made much progress combatting HIV/AIDS, there is still much work to be done. In the words of Dr. Ron Valdiserri: “Everyone has role to play in ending HIV epidemic in America.”

2 Responses to “Everyone has role to play in ending HIV epidemic in America.”